The story so far … 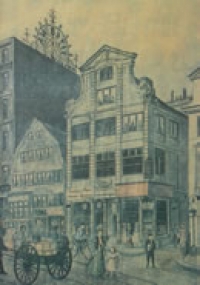 On 24 August 1889, the bookbinder Brand and the press gilder Wagner opened a press gilding workshop at Alten Steinweg 19 in Hamburg.
When Mr. Brand left in 1912, the company remained solely in the hands of the Wagner family. The wives of the owners had to overcome tough times twice in the history of the company: 1912-1918 Mrs. Hannchen Wagner and 1967-1970 Mrs. Hedwig Wagner. Many relocations due to expansion and the impacts of war brought the company out of the old town (Alter Steinweg 19 – Alter Steinweg 73 – Katharinenstr. 30 – Deichstr. 34 – Glashüttenstr. 79) to Stresemannstr. 375. In 1970, Mr. Egon Breyer became joint owner and paved the way for the company’s current work as a contract service provider for punching, stamping and hot film stamping. The current owner Mr. Thomas Freitag joined in 1993. In 1994, he became co-owner before taking sole ownership of the punching shop in 1995.

On the occasion of the 125th anniversary of the company “Rachow Kunststoff-Folien”, this certificate was handed over to us. It should be noted, that until 2012 the company worked under the name Brand & Wagner … and that since 1889th.
Read more…